Numerous data centers in the industry today predate the focus of the industry on technologies that are efficient. From the design through the installation and technology selection, uptime and initial cost were the focal points since energy availability was not a consideration and power was not a major expense. The environmental impact of the data center and concerns about costs associated with the consumption of power had not found its way into the corporate consciousness. In today’s economy energy is a major issue. In the year 2006, data centers in the US consumed about 61 billion kWh of electricity while fossil fuels in the US generated approximately 70 percent of the nation’s electricity. The consequences to the economy and the environment render some designs of legacy server rooms wasteful and irrelevant. A prime example is the architecture of the 480V-208V power distribution. The components PDU, UPS and server power supply are aged and lose around 40 percent of electricity that is incoming, during transformation and distribution. To defend it though, this approach of power distribution was designed with an envelope of minimal power in mind. It amplifies its inefficiencies in the context of installations of high density, where loads of racks can possibly eclipse 30kW.

It is no longer affordable for a data center to lose 40 percent of incoming electricity. This is why experts are investigating new technologies of power 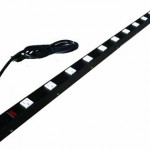 distribution and data center systems. According to Green Grid the latest architectures achieve an overall efficiency of about 80 to 90 percent and there is only a 4 percent difference between the most efficient and the least. In addition, newer equipment has performance curves that are considerably superior at loads that are lighter since the equipment is steeper and better maintained across the curve of loading.

There has been a renewed interest in the last few years in distributing the power of Direct Current DC throughout the server room and the data center. There are numerous points such as power supplies and UPS, where the incoming power of AC can be converted into DC. There are losses during the process of each conversion which can be server depending with the equipment. Proponents view the power of DC as a means to reduce electrical losses and hence achieve a design that is more efficient. 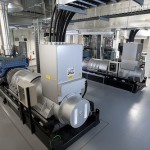 New technologies that will improve power distribution efficiency in server rooms are now available. The latest PDUs and UPS systems achieve efficiency that hits a percentage in the nineties and a number of power supplies of servers have reached and exceeded the ninetieth percentage mark. Nevertheless, these advanced technologies may be in severe contrast to equipment that is already inside a data center. For instance in 2008, Lawrence Berkley National Labs in a whitepaper estimated that a classic AC system in a recent data center would have a power supply that is around 73 percent efficient and UPS that has an efficiency of about 85 percent. If due to corporate protocol or tax incentives an organization refreshes its hardware every three or five years, they may take shipments of the newest server products that have power supplies which are highly efficient. Advanced power supplies have a visible impact on the overall efficiency of power distribution. Even so, it is unrealistic for an existing data center to make a comprehensive change to DC distribution. The industry must be able support the DC power distribution before it is viable for a fresh facility, particularly the 380Vdc design which is highly efficient. There are no server manufactures or products of rack power distribution that support the power of 380Vdc but a number of them are available at telecom voltage of 48Vdc. A green field data center is more likely to take full advantage of the newest architectures and product advances than an existing center which may face the risk of prolonged downtime costs and other complexities.

How to Choose the Right Datacenter Service Provider

September 18, 2014 DCT_Mark Comments Off on How to Choose the Right Datacenter Service Provider