Yes, you heard right, underground data centers, right out of a James Bond movie where the scheming villain stored all his data and made evil plans to hold the planet hostage. Providing an extremely secure solution for data protection, even against nuclear war, they are simply wow! Underground data centers have been a reality since the dawn of computers itself. Mainly used for military applications they became famous during World War II and especially in the cold war when data security was of prime importance. Today a lot of underground data centers exist, a few know, many unknown. Going underground would challenge most supply based entities to the data center; say food, air, and logistics. Considering these drawbacks and a few more, there are still many underground data centers that are active today, let’s find out why.

One of the main drawbacks to human living conditions can turn out to be an amazing advantage to data center operation. You heard right! No fire. Considering a depth of at least 3000 feet, underground caverns have hypoxic or inert air ventilation. Simple, no oxygen, no fire! Additionally there will be no secondary extinguishing related damages like corrosion, harm to the environment, air poisoning and so on. Hard disks are the most affected during a fire, by the fire or by the extinguishing equipment; hence, here there is no damage because the fire extinguishing equipment is not triggered at all. At the end of it, there is continuous operation of all equipment.

Nukes are Puppies, it is Safer than a Vault 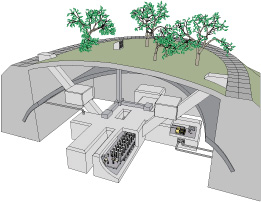 An EMP is an easy way to knock out electronic equipment. Electronics once struck by an EMP can never be restored. Underground data centers are well equipped to shield all equipment against EMPs. Heavy steel plating, statically charged regions and dynamic pulse repulsing devices may optionally be installed. Even with a full scale war on the surface, the data center can operate seamlessly at all times. EMP protection of an underground data center is especially useful for military personnel.

Some underground data centers are built under layers of ice; it inevitably gets really cold inside the data center cavity. Air economisers are used to circulate air within and voila, instant cooling. In fact in some really cold countries there is no need to have additional cooling at all. There is a huge saving in power costs and an increased independence from the world ‘above’.

If located close to a beach, under sea optic fibre cables can be directly connected to the data center. There is literally no sourcing for connection whatsoever. Military grade secure lines can be established with ease. Underground data centers can also take advantage of underground power supply; it’s secure fast and cannot be easily tampered with.

Many major search engines and social networking giants have chosen secure underground data centers as a backup. Running multiple operations across North America and Europe they are slowly migrating out of the Americas. Soon their regular websites may be run from the underground.

Underground data centers promise connectivity beyond parallel, so why not live off what the earth has to offer? Why not go underground?

Getting to the True Data Center Cost

December 23, 2015 sakib ahmed Comments Off on Getting to the True Data Center Cost

May 22, 2012 DCT User Comments Off on Cloud Guidance to Reach All Irish Businesses Looking to Move to Cloud Computing