Network operators increase network reliability by configuring switches or SIP-400 CWAN line cards in redundant pairs and by provisioning links to the redundant pairs. Redundant network elements and redundant links can add complexity to network design and operation. Virtual switching simplifies the network by reducing the number of network elements and hiding the complexity of managing redundant switches and links. A VSS combines a pair of Catalyst 6500 series switches or SIP-400 CWAN line cards into a single network element. The VSS manages the redundant links, which externally act as a single port channel.

The VSS simplifies network configuration and operation by reducing the number of Layer 3 routing neighbors and by providing a loop-free Layer 2 topology. 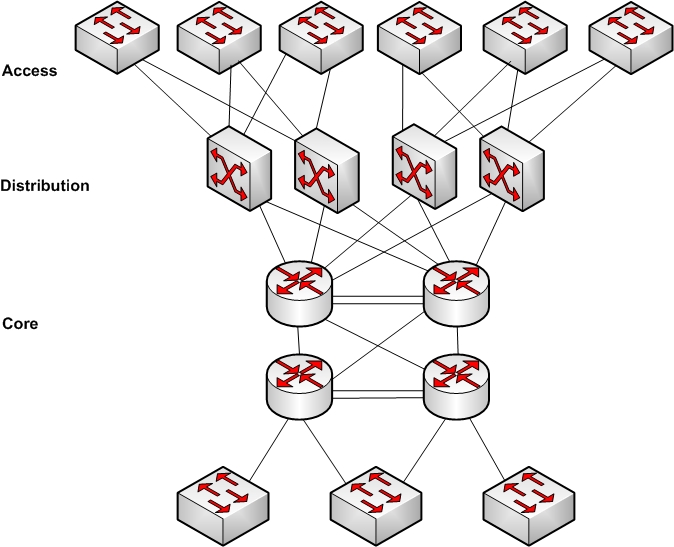 The VSS active chassis controls the VSS. It runs the Layer 2 and Layer 3  control protocols for the switching modules on both chassis. The VSS active  chassis also provides management functions for the VSS, such as module online insertion and removal (OIR) and the console interface.

For the two chassis of the VSS to act as one network element, they need to share control information and data traffic.

The virtual switch link (VSL) is a special link that carries control and data traffic between the two chassis of a VSS. The VSL is implemented as an Ether Channel with up to eight links. The VSL gives control traffic higher priority than data traffic so that control messages are never discarded. Data traffic is load balanced among the VSL links by the Ether Channel
load-balancing algorithm.

The following sections describe the main functionality of a VSS:

The VSS active supervisor engine runs the Layer 2 and Layer 3 protocols and features for the VSS and manages the DFC modules for both chassis. The VSS uses VSL to communicate protocol and system information between the peer chassis and to carry data traffic between the chassis when required.

With some exceptions, the VSS has feature parity with the standalone Catalyst 6500 series
switch. Major exceptions include:

For additional information about VSS, Refer your Cisco hardware documentation or www.cisco.com

The Inside Dirt on Raised Floors

January 23, 2012 DCT User Comments Off on The Inside Dirt on Raised Floors