DuPont Fabros Technology, one of the biggest providers of data centers for major cloud and internet companies in the US, kicked the year off with an admission that it has made an expensive mistake. In the best-case scenario, the mistake will cost the company $115 million, but it may end up costing more.

DFT admitted that going into the New Jersey data center market six years ago with its wholesale data center business model was the wrong thing to do. The company said it wants to sell NJ1, its massive 360,000-square-foot data center building in Piscataway and get out of New Jersey, most likely for good.

“NJ1 is a first-class data center, and we have developed many valuable customer relationships during our ownership,” Chris Eldredge, DFT’s president and CEO, said in a statement. “NJ1’s location is best-suited, however, for more retail-oriented operations. Our plan to exit the New Jersey market with the sale of this property will allow redeployment of capital in target m arkets that match our objectives for growth and profitability.”

Eldredge, a former NTT America exec, took the real estate investment trust’s helm in February of 2015, replacing Hossein Fateh, one of the founders. On Fateh’s watch, the company built a thriving business in Northern Virginia, leasing large chunks of space and power capacity to internet and cloud companies. As of October 2015, its biggest customers were Microsoft, Facebook, Rackspace, and Yahoo, contributing 22 percent, 20 percent, 11 percent, and 7 percent of the landlord’s incoming annual rent respectively.
DFT’s Only Weak Market

DFT has done well in Chicago and Silicon Valley markets too, but in New Jersey it’s been having a tough time. Today, after six years in the market, the company has fitted out about 90,000 square feet of data center space in the building, 70 percent of which is occupied.

“It’s the one facility they haven’t done well in,” Kelly Morgan, research director at 451 Research, said about NJ1.

Why it hasn’t done well isn’t entirely clear, and DFT representatives declined to comment beyond what the company said in the announcement. The official explanation, that New Jersey is a better retail colocation market than it is a wholesale data center market, isn’t entirely plausible. If it’s good for retail colo, why not lease the building to a retail colo provider?

In fact, DFT did lease a portion of it to a retail colo provider, albeit one that went bankrupt. Net2EZ was DFT’s big anchor tenant in New Jersey, Morgan said. The tenant filed for bankruptcy in early 2015 and changed its name to Net Data Centers. In November of last year, its assets were acquired by Anexio Technology Services, which reduced the size of its deployment in DFT’s data centers in New Jersey and Northern Virginia by 2MW total.

There is a number of possible reasons DFT has struggled there, including the nature of data center customers in New Jersey, design of the facility’s infrastructure, and the company’s timing for bringing it to the market.
Wrong Design for New Jersey?

A data center real estate broker, who wished to remain anonymous, said one reason could be that the facility’s design isn’t quite right the market. He agreed that market conditions across the Hudson from Manhattan “aren’t great,” but that’s only part of the story.

The bulk of DFT’s data centers are in Northern Virginia, its core market, and most of that capacity is leased to cloud providers and web services companies. Those customers need much higher power densities than enterprise customers do, and designing high-density infrastructure for cloud users has been one of DFT’s specialties.

Majority of data center users in New Jersey, however, are financial services companies, who don’t need that much power at every rack for the applications they are willing to put in leased data centers, the broker said.

For cloud and internet companies, New Jersey is simply too expensive and too close to Northern Virginia, one of the most highly sought-after data center locations. These companies deploy massive data centers that use a lot of energy, which they can get in Northern Virginia for almost half of what they have to pay in New Jersey. Other operating costs are higher in New Jersey too, such as its unionized labor force.
Poor Timing?

A senior-level official for another major data center provider, who also wished to remain anonymous, said timing may have been an issue. New York and New Jersey’s financial services sector was strong before it was slammed by the 2008 financial crisis but hadn’t really recovered in 2010, when NJ1 came to market.

He also pointed out that because DFT’s anchor tenant in the building was a data center service provider, it has infrastructure designed to be shared by multiple tenants, which is problematic for financial services firms, who are some of the most security-sensitive data center users out there.

It may not be the right data center for the market, but everything has it price, which seems to be the angle DFT is going for. In its announcement, the company said it expects to incur an “impairment charge” between $115 million and $135 million as a result of the sale of NJ1. That’s the size of the discount it is willing to give to whoever agrees to buy it, a discount so steep, it may just outweigh hesitation caused by the design or skepticism about the market.

Value of Having Data Warehouse Backup and Recovery

February 21, 2014 DCT_manisha Comments Off on Value of Having Data Warehouse Backup and Recovery 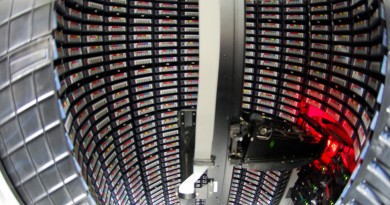