Do you recall  Dijkstra’s algorithm, shortest path first algorithm in your engineering and CCNA preparation . Its time to know its one of the  interesting application .

OSPF is an interior gateway protocol that helps to facilitate the routing information in for the form of LSA (Link state Advertisement) within a single routing domain. It gathers LSA from available routers and constructs a topology map of the network.The same topology map is shared between all the devices with an Area .  OSPF was designed to support (VLSM) or (CIDR) addressing models.

OSPF senses changes in the state of the link , such as link failures, quickly and converges on a new loop-free routing structure. It uses the Dijkstra’s algorithm to find the shortest path tree for each route.

The link-state information is maintained on each router as a link-state database (LSDB) which is a tree-image of the entire network topology. Identical copies of the LSDB are periodically updated through flooding on all OSPF routers.

The best routes are selected by the OSPF by discovering the paths with the lowest cost to a destination. The route cost includes the cost which is configured on interface on which the Link State Advertisement is received by the OSPF and the cost configured on the outbound links operating between the destination network and the router. 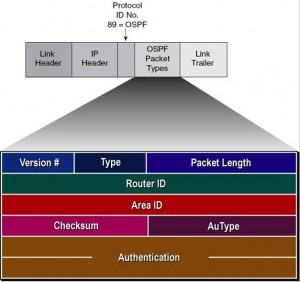 The fields on the OSPF header are as follows:

How to Configure OSPF on Cisco Router?

Following commands should be entered in Router configuration mode on Cisco router to enable OSPF,

In order to determine the neighbor state of OSPF, you have to run the following command,

Most of the engineers find it difficult to troubleshoot the OSPF if the goes down or is not coming up . Although from Practical expereince it is not difficult if you know how OSPF works and what happens of each stage.

From troubleshooting perspective you can run the command “ Sh ip ospf nei “ . it will show the the neighbor states and their status.

Wish you a happy learning !!!

May 29, 2012 DCT User Comments Off on Data Center Networking Guidelines