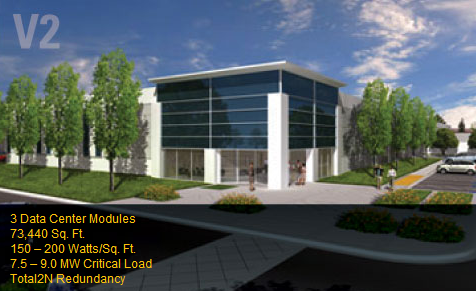 With an industry-leading Power Usage Effectiveness of 1.12, the second Santa Clara data center from data center developer Vantage Data Centers now ranks among the most energy-efficient data centers in the world.

PUE is calculated based on the total facility power divided by the IT equipment power, meaning that a facility comes closer to perfect efficiency as its PUE score gets closer to 1.0.  According to Vantage’s announcement this week, its V2 facility in Santa Clara combines advanced electrical and mechanical design for a 1.12 PUE which is expected to save customers more than $72M over 10 years, largely due to power and cooling costs.

“V2 represents an entirely new data center vision, combining the option to lease space within a customized facility with the ability to grow within an existing building without disruption and with energy and operating expense savings on par with the world’s most energy efficient data centers,” said Vantage CEO Jim Trout in a statement. “V2 was built with unprecedented tenant collaboration, integrating decades of Vantage engineering and design expertise with tenant expertise and insight into critical requirements and opportunities for cost savings.”

This data center was constructed and leased two years ahead of schedule, taking just eight months to build from the ground. It was developed in close collaboration with the single tenant now occupying the building. V2 is also the first vertically scalable wholesale data center, with a design that allows the tenant to double IT capacity (from 9 MWs to 18 MWs) within the same physical footprint without disruption.

“Vantage’s collaborations with their customers are the closest thing I’ve seen to an integrated whole systems design process that involves two separate institutions, and that’s not easy to do,” said Stanford University’s Jon Koomey, PhD, whose forthcoming book Cold Cash, Cool Climate describes companies can profit from tackling climate change. “Typically such processes are found in product design inside companies like Apple, where the designers have complete control, but it’s rare in the data center industry for separate companies to coordinate in this way in facility construction.”

Along with its PUE of 1.12, V2 is up for LEED Platinum certification from the US Green Building Council, following in the footsteps of V3, which received this building certification in August 2011. In addition to its server rooms being highly efficient, the building will also have highly productive and efficient workspaces, including class-A offices and amenities.

Vantage has also begun construction of its third data center on the Santa Clara campus with anchor tenant Telx planning to offer a mix of colocation and interconnection services to a variety of their Silicon Valley customers, including optional services for Vantage Santa Clara tenants.

Have something to say about Vantage Data Centers, or about the topic of energy efficiency and green hosting in general? Post your views and comments on the Data Center Talk forum. And, as always, keep up to date on data center news and resources on Data Center Talk.

Apple Refuses to Comment on the Mysterious Construction in Maiden N.C

March 12, 2012 DCT User Comments Off on Apple Refuses to Comment on the Mysterious Construction in Maiden N.C