As winter approaches, could a warm server take out the chill as opposed to a radiator or fireplace?

A makes the case that servers can be sent to homes and ofﬁce buildings and used as a heat source. The household data centers, which Microsoft calls “Data Furnaces”, has three main advantages over traditional data centers: a 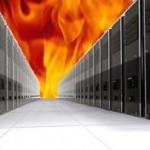 According to figures from the US Environmental Protection Agency, the nation’s servers and data centers consumed around 61 billion kWh in 2006 — 1.5 percent of the country’s total electricity consumption. And as one of the fastest growing sectors in the US, it was estimated that national energy consumption by servers and data centers could exceed 100 billion kWh nearly double by the end of the year.

“The temperature of the exhaust air (usually around 40-50°C) is too low to regenerate electricity efﬁciently, but is perfect for heating purposes, including home/building space heating, cloth dryers, water heaters, and agriculture,” the study states.

While it’s most likely that early adopters will be ofﬁce buildings and apartment complexes with mid-sized data centers heating them, micro-datacenters on the order of 40 to 400 CPUs could serve as the primary heat source for a single-family home. These Data Furnaces would be connected to a broader cloud via broadband, and connect to the home heating system just like any conventional electric furnace.

Microsoft is far from the only company looking to combine the cost of powering servers and heating buildings.

In 2007, for instance, Intel released a study on reusing data center heat in offices, and in 2010 it opened Israel first LEED-certified green building, which featured a 700-square-meter (about 7,500 square feet) server room where heat is recycled for hot water and winter heating.

In another interesting take on reusing data center heat, the Swiss Federal Institute of Technology Zurich, and IBM built a water-cooled supercomputer that provides warmth to university buildings. Dubbed “Aquarius”, the system consumes as much as 40 percent less energy than a comparable air-cooled machine, IBM reckons.

Microsoft identifies some challenges to their Data Furnace idea such as how to monitor and react to local changes in power and broadband usage, physical security, and the lack of dedicated system operators in a home. What is not discussed in the report is how servers would be cooled in warmer months, the risk of fire from overheating, and the potential noise that could come from so many servers.

While there’s still work to be done, the idea that electricity demand could be curbed by harnessing the heat from data center and putting it to good use is exciting and one that we’ll be following intently.

February 13, 2012 David.Hamilton Comments Off on Trending topic: What makes a good server?